Sony surprised the camera world and released 3 new APS-C lens for its E mount, 2 Wideangle primes and 1 Wideangle Zoom.For most users, the  Sony E 10-20mm F4 PZ G Power Zoom lens is probably the most exciting lens out of the three, specially designed for videography in mind.

Spec and focal range wise, this new lens looks so much like another Sony lens that was recently released, the Sony FE PZ 16-35mm F4 G  which has a full frame coverage. Both lenses are Power Zoom lenses and have similar focal coverages.The 10-20mm has a full frame equivalent focal range of 15-30mm which is 1mm wider on the wide end but 5mm shorter at the tele end but these are still in very comparable range.

Here is a size comparison which shows how impressively compact the new 10-20mm is, especially considering that the 16-35mm F4 G PZ is no slouch, quite compact for its class. 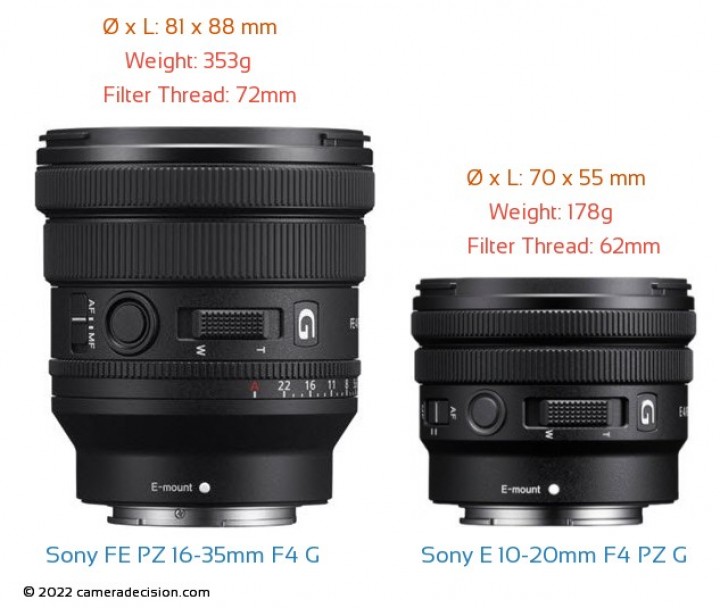 Here is a quick comparison of specs and features of the two lenses. Besides the full frame coverage vs APS-C coverage, the biggest advantage of the 16-35mm is the inclusion of an Aperture ring on the body whereas with the 10-20mm, you rely solely on the external controls on the camera body.

Read our detailed comparison of these two lenses here.

If you think the size comparison of and APS-C lens vs a FF lens is not fair, here we have a comparison with another APS-C lens, the previous Wideangle Zoom lens for the E-mount, Sony E 10-18mm F4 OSS. The new Sony 10-20mm F4 is still more compact compared to this APS-C lens even with 2mm longer reach (the 10-18mm has a built in Image Stabilization / OSS ).

Read the detailed comparison of these two lenses here.