Camera monitors are not one of the digital camera accessories that we typically review  at Camera Decision, however when PortKeys contacted us and  offered to send a LH5P unit for us to review, we accepted this without a hesitation since the feedback we get from our readers these days show the increasing interest in the camera monitors, partially thanks to the rise of Youtube and the content creators who want to up their game with better camera accessories that compliments their digital cameras in order to provide higher quality results in shorter time.

Disclaimer: Portkeys did not pay us to write this article and no money was exchanged. However, the company sent us the product (PortKeys LH5P )to review for free. They didn't ask for any pre-conditions other than our honest opinion. This review is my unbiased opinion as PortKeys did not modify, influence, or give input about the article before its publication.

PortKeys released the LH5P 5.5-inch touch-screen camera monitor in January 2021. This 1700nit monitor has an HDMI input and output connector, and supports resolutions up to 4K DCI. LH5P has almost  all the  features that you can find on a modern field monitor. Besides the affordable price tag of $400 for the given features, maybe the strongest selling point of the LH5P is its camera control abilities, wired or even wireless for selected video cameras (more about this in the review).

OK but Why do I need  a Camera Monitor / Field monitor?

There are many resources about why and how to use field monitors, no need to get into too much detail but basically the typical 3-inch to 3.5inch screens that are found in  cameras that we review in this website are either too small and lacks the functionalities that aid video and stills production that advanced user require most of the time. Besides the size, the built-in LCD screens on digital cameras, especially the fixed-type and majority tilting  screens don't provide the screen angles that you need for video production. Camera monitors are  effective tools to fill these gaps in the process and some more.

PortKeys is a Chinese company specialized in creating making affordable products that offer filmmakers an excellent price/features ratio, mainly known for their monitors with camera control functions. You can check their official website to get mote information about their products.

Background and comparison to its predecessor, LH5H

LH5P monitor is the successor to the LH5H, which was released in June 2020 and stayed in production for only 6 months, and replaced by LH5P. Both products belong to the entry-level monitor class of the manufacturer. We didn't have a chance to use LH5H but from the specs and past reviews, we can see that both models have almost the same feature set except the screen size and body material&design. LH5P's 5.5-inch screen is 0.3-inch larger than the 5.2-inch screen of LH5H.

From the reviews that we could find on the LH5H, we have seen that the plastic body of that unit which although helps to keep the unit weight low, didn't succeed to give the confidence to some of the reviewers about the build quality and durability.

The LH5P unit that we are reviewing is a good proof that these complaints were addressed by the company. The LH5P has a very well built aluminum alloy body that could easily take some beating in tough conditions if needed while still staying relatively ligh-weight. As you know, especially when travelling, every gram counts. That's another reason we prefer to use monitors around 5-6" range instead of 7" or larger monitors at Camera Decision but again we are not a video production company so let's say this is a good horse for our course!

What's in the Box? 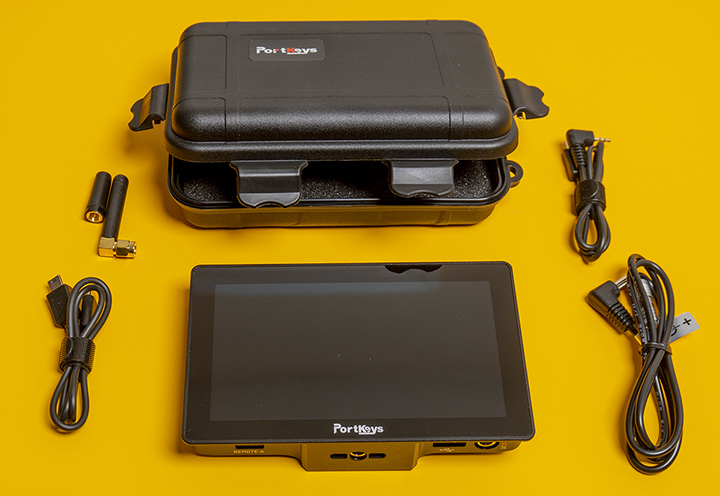 What is not in the Box?

The LH5P can be operated using Sony's NP-F batteries but they are not included with the unit. They are widely available in various capacities from online sellers.

The hardcase storage box that comes with the LH5P is well built box with enough cushion to protect the unit but unfortunately it is only big enough to only store the unit but nothing else. The Sony batteries or the antennas doesn't fit the box so its use is limited. 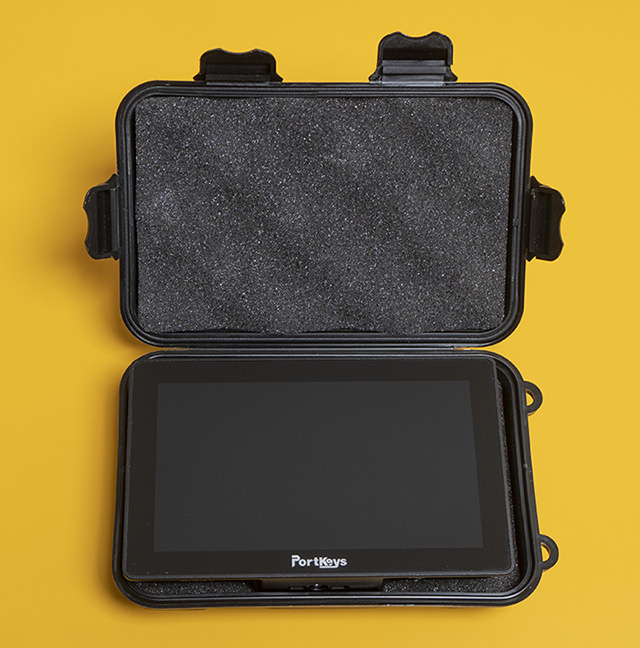 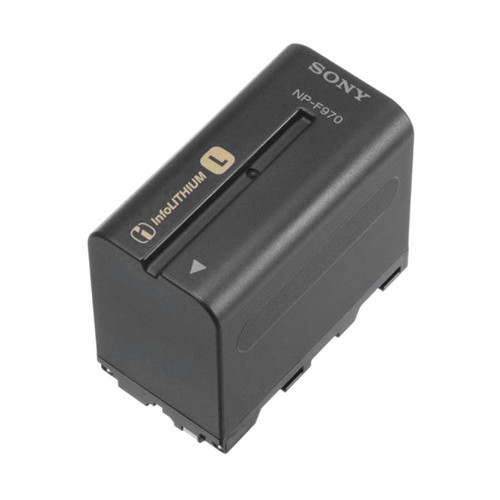 The physical control buttons and switches are laid out on top part of the unit. There are 4 customisable function buttons (F1 to F4), an  on/off switch, and menu controls ( EXIT, MENU, - and +). The LH5P has a touch screen and all these features can be controlled by on-screen touched but there is an option to also disable Touch screen function and use buttons only (I disabled this touch function to try before I was familiar enough with the menus so had a little hard time to enable it again!)

On the left side of the monitor, you see the HDMI In which is connected to your camera, HDMI Out to output the LH5P screen to another external screen, and the Headphone jack which comes handy if you prefer to monitor audio using your monitor. 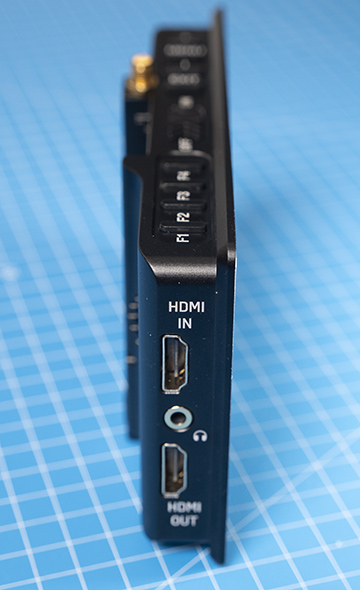 The right side of the monitor is occupied by the fan vents. Yes, the LH5P has a built-in fan to keep the unit in ideal working temperatures and it is adjustable with setting of Low, Medium and High. Istudio conditions, the Low setting was enough to keep the unit cool and the noise level was very low so no need to worry much about the microphones picking up the noise unless they are located very close.

At the bottom left of the unit, you will find the Remote Port which lets you control some functions of your camera via a wire running from your camera. Portkeys lets you choose from a selection of cables types depending on your camera when you order your monitor.

You’ll also find a USB-A port for loading up LUTS using a USB memory stick, updating the firmware or powering the unit. A USB stick was included in the box which had some preloaded LUTS and the operating manuals which is a thoughtful touch by PortKeys. You can save your own LUTS in this stick and use them with your monitor.

On the bottom right, there is  a DC (7-24V) jack with five pins which can be used with the supplied D-Tap to 5-pin cable for  camera control and power input/output.

The PortKeys LH5P has few  input/output power ports and options. Our preferred option is  to power the monitor by using the Sony NP-F batteries which minimizes the need for extra cables.

The other option is to use the 5-pin power input/output port, which PortKeys calls the “aviation”. By using the included D-Tap to 5-pin power cable and a V-Mount  battery, you can power your monitor.

You can use the included 5-pin to barrel connector cable to power external accessories. Another power out option is to use the USB Type-A 5V 2A port to charge your devices.

The LH5P sports a high-quality 5.5" WLED  touchscreen. It has a 1920 x 1080 maximum resolution (Full HD/1080p) and a maximum bightness of 1700 nit. It is not the highest brightness that you can find as some models goes up to 2200 nit but 1700 nit is perfectly fine in most situations except some very strong and direct sunlight. The LH5P doesn't come with a sunshade but you probably won't need it anyway. In perspective, the very popular Atomos Ninja V Recording Monitor has a max brigtness of only 1000 nit and it is widely used by for professional purpose. 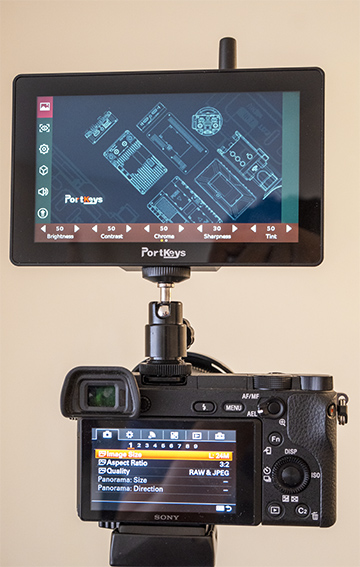 We learned that the LH5P display is color calibrated by Portkeys out of the factory  using an X-Rite i1 Display Pro colorimeter. As a result,  colors seems pretty accurate to our eyes the with default settings. You can further improve the accuracy by adjusting brightness, contrast, chroma, sharpness, tint, and color temperature if you need to.

The panel has a contrast ratio of 1000:1, and  is 10-bit (8+2 FRC) which means it is not a true 10 bit. True 10-bit monitors offer 1024 shades of color per channel (RGB) and can display approximately 1.07 billion (1024 x 1024 x 1024 ) colors overall. 8-bit + FRC monitors on the other hand, actually have 8-bits  per channel but using a frame rate control technique, they can still display virtually the same number of colors as a 10-bit monitor. If you are lost in the details, just don't worry, you don't lose much in terms of quality. This is a technique that is used even in some of the more expensive monitors.

The touch sensitivity of the LH5P panel is good  although I believe the modern Smartphone screens sensitivity and accuracy spoiled us so much that generally no other touch screens  gives the same level of satisfaction but we as camera users learned to keep our expectations a little low anyway.

I have to say that this is not an easy to use monitor, especially if you haven't been familiar with this kind of monitors for a long time however it is kind of expected since this monitor has so many features and like any advanced tool, it takes time to master. The gesture based UI (user interface) can become a bit confusing at the beginning but once you get used to it, things starts to flow faster for us. Alternative to the touch menus, you can use the physical menu buttons instead of the touch menus but the shortcoming here is that you can't change the pages with the physical buttons.

In any case, we strongly recommend you to read the included manuals and instructions to learn more about the UI and gesture controls to navigate your way through the menus. One promising feature is the firmware updating capability. PortKeys may release firmware updates in the future to improve the  UI based on the feedback from the users. 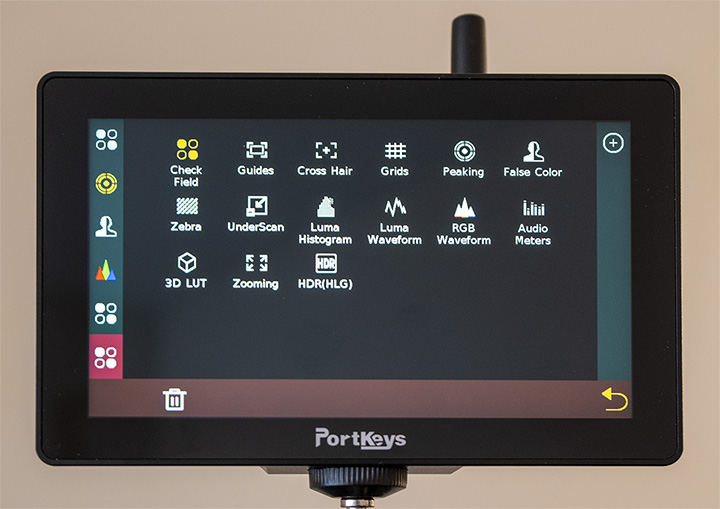 The main feature that sets  PortKeys LH5P apart from many of its competitors is its camera controlling capabilities.. To make it work, you have to connect an optional cable from the monitor’s dedicated mini-USB port and connect it to your camera.

These are the cameras that supports remote control by PortKeys LH5P:

As can be seen from the list above, cameras such as Sony A7 Mark III and  BlackMagic BMPCC4K /  BlackMagic BMPCC6K cameras can be controlled wirelessly. We didn't have access to these cameras but on our Sony A7R IV, A6300 and A6400, we didn't have any issues controlling the basic functions with wired connection.

You can also connect the LH5P to a Tilta Nucleus N/M wireless follow focus to pull focus via the monitor.

We think the remote control functionalities of the LH5P is a big bonus compared to other monitors that don't have this feature. Especially if you have one of the wireless control supported cameras, this is a game changer.

I have used the LH5P with NP-F550 batteries which has a capacity of 2200mAH. The battery life highly depends on the brightness you choose on the monitor so it gets a big hit when you are using it under sunlight. Other parameter is the condition of the battery that you are using. I haven't done a scientific test but with an average use, I managed to have 60-80 minutes battery life with NP-F550 battery which is really good.

After testing PortKeys LH5P monitor fir 3 weeks under various conditions, it proved us to be a quite capable and affordable monitor which will support your content creation flow. As with many other tools, you have to give yourself some time to master it. We definitely recommend spending time reading instructions. The monitor gets even more attractive if you are willing implement LH5P's camera control functions to your workflow and have a camera that is supported. Camera control functions is the its biggest selling point. 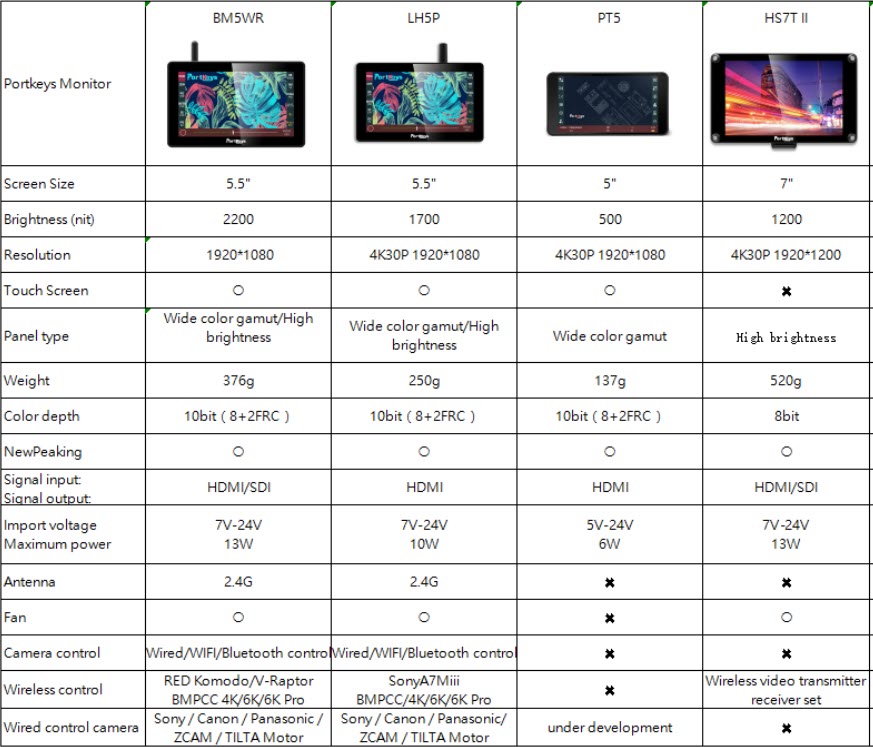