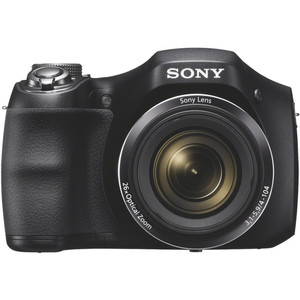 Now let's get in to more details of our Sony H200 review by analysing its specs and features and listing out its pros and cons compared to average competitor cameras in its class.

Let's look at how the size of the Sony H200's 1/2.3" sensor compares with other standard sensor sizes.

Here is the front and top view image of Sony H200 with the dimensions: 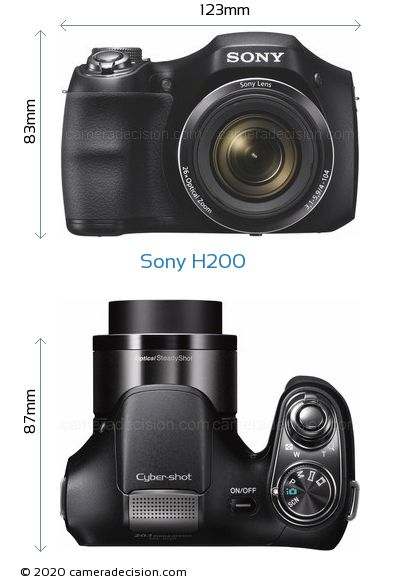 In order to give you a better idea about the real life size of Sony H200, we have added an image of how it looks next to a credit card and an AA type battery.

Now lets compare the weight and thickness of Sony H200 with its main competitors:

Sony H200 doesn't have any environmental sealings on its body so you got to be extra careful to protect it against water and dust. If you shoot under these conditions very often, consider checking Top Compact Cameras with Weather Sealing page.

Sony H200 has a Fixed Type 3" LCD screen with a resolution of 460k dots. Both the screen size and the screen resolution is up to the standards of this class. 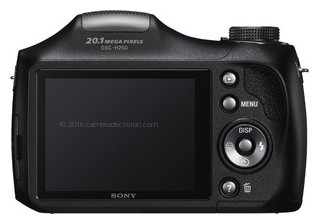 H200 doesn't have a viewfinder and no option for external viewfinder. Lack of a viewfinder can be problematic especially under strong light where visibility of LCD screens goes down dramatically. If you need a DSLR-Like camera with a built-in viewfinder in a similar price range, consider Panasonic Lumix DMC-FZ80 (Lumix DMC-FZ82) (Compare) or Kodak EasyShare Z990 (EasyShare Max) (Compare). If the price is not an issue, take a look at our Top Rated Cameras with Viewfinders.

Unfortunately H200 doesn't have an external flash shoe so you are limited with the built-in flash.

With Sony H200, you can record your videos at a highest resolution of 1280 x 720 at 30 fps and save in MPEG-4 and AVCHD formats. 1280 x 720 is a low video resolution by todays standards. If video quality is important for you, we recommend you to look at cameras with Full HD, even better 4K / Ultra-HD resolution .

H200 has a built-in Mono microphone and a Mono speaker.
Sony H200 doesn't have any connections for external microphones and headphones. If you need a DSLR-Like camera with external microphone connectivity, consider Sony Cyber-shot DSC-H400 or Panasonic Lumix DMC-LZ40 in a similar price range.

Sony H200 is powered by battery which provides a shooting life of 240 according to CIPA standards. Considering that the average battery life of DSLR-Like type cameras is 353 shots, Sony H200 has a short battery life for its class so we strongly recommend H200 owners to buy some extra batteries.

Fujifilm HS35EXR with its 600shots is the model with longest battery life among Small Sensor Superzoom cameras. Check the comparison of Sony H200 vs Fujifilm HS35EXR or take a look at Longest Battery Life Compact cameras list.

Sony H200 Features Compared to Main Competitors
In this section, we review and score Sony H200 in 5 different photography areas. This first spider web graph shows how the H200 compares with the average DSLR-Like camera.
Hover your mouse over the points to see the score details for each photography type.

Sony H200 has a score of 27 for Portrait Photography which makes it a POOR candidate for this type of photography. If Portrait We strongly recommend you to check our Top Compact Cameras for Portrait Photography list and consider these alternatives over theH200.
Very High Resolution Sensor: 20.0MP
Image Stabilization
Average Ergonomics&Handling
Small 1/2.3" (6.17 x 4.55 mm) sensor
No RAW shooting capability

Sony H200 has a score of 50 for Street Photography which makes it an AVERAGE candidate for this type of photography. If Street is important for you, we recommend you to check our Top Compact Cameras for Street Photography list.
Live-view
Face-Detection Focusing
Image Stabilization
24 mm - Good Wide Angle Coverage
Medium sized Body

Sony H200 has a score of 38 for Sports Photography which makes it a POOR candidate for this type of photography. If Sports We strongly recommend you to check our Top Compact Cameras for Sports Photography list and consider these alternatives over theH200.
Fast Continuous Shooting: 8.0fps
Image Stabilization
633 mm Tele Lens
Average Ergonomics&Handling
Environmental Sealings
Slow Max shutter speed: 1/1500s
Unknown Focus Points


In this section, we analyse how Sony H200 compares with other DSLR-Like cameras within a similar price range. In the Bubble chart below, you can see Overall Score vs Price comparison of H200 and the top 10 contenders in the same range. Hover your mouse on the bubbles to see the details of the cameras.
Read a more detailed analysis of Sony H200 alternatives.
Here is the eight most popular comparisons of Sony H200 amongst Camera Decision readers.

Compare
It would also be interesting to compare Sony H200 with Mirrorless Cameras. Below we have listed 4 highest ranked Mirrorless cameras in Sony H200's price range.