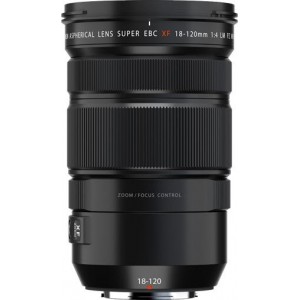 x
Add a Camera for comparison
Fujifilm XF 18-120mm F4 is an Auto Focus (AF) Standard Zoom lens with APS-C / DX max sensor coverage and it is designed to be used with Fujifilm X mount cameras.

Below you can find the MTF chart of Fujifilm XF 18-120mm F4 which would give an idea of the its contrast and resolution from the center to its edges.

Fujifilm XF 18-120mm F4 features Rotary (internal) zoom method where the length of the lens doesn't change while you are zooming in or out. Even though this design has a size disadvantage in general compare to extending designs, it has the benefits of better sealing against dust and moisture, no zoom creep and no weight balance shift while zooming.

Fujifilm XF 18-120mm F4 has a Power Zoom feature which consists of a rocker switch and a internal zoom motor where you can change the focal length of the lens by pushing this switch. This method of zoom is smoother and generates less shake than zooming in and out using your hand, especially beneficial while recording video.

Fujifilm XF 18-120mm F4 comes with a removable petal shaped lens hood which is handy to reduce lens flare and glare in your photos.

Here is the eight most popular comparisons of Fujifilm XF 18-120mm F4 amongst Camera Decision readers.