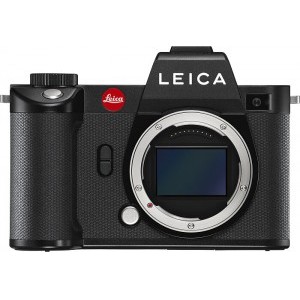 In this review, we will be comparing SL2 and A7R III, two Pro Mirrorless cameras from Leica and Sony. Leica SL2 was introduced to market in November 2019 and Sony A7R III was launched in October 2017. As you can see, A7R III is 2 years older than SL2. Let's see if this age difference between two cameras makes a big difference.

Both cameras have Full frame sensors but Leica SL2 has a 47.0 MP and Sony A7R III has a 42.0 MP resolution.

Let's have a brief look at the main features of Leica SL2 and Sony A7R III before getting into our more detailed comparison.

Let's read on the following sections in order to better understand in detail how Leica SL2 and Sony A7R III compares and hopefully end up with enough arguments to decide which one is better for you.

Size and weight is a big decision factor when you are trying to find the ideal camera for your needs. In this section, We are going to illustrate Leica SL2 and Sony A7R III side-by-side from the front, back and top in their relative dimensions.

Below you can see the front view size comparison of Leica SL2 and Sony A7R III. Sony A7R III is 19mm narrower and 11mm shorter than Leica SL2 but it is also 32mm thicker. 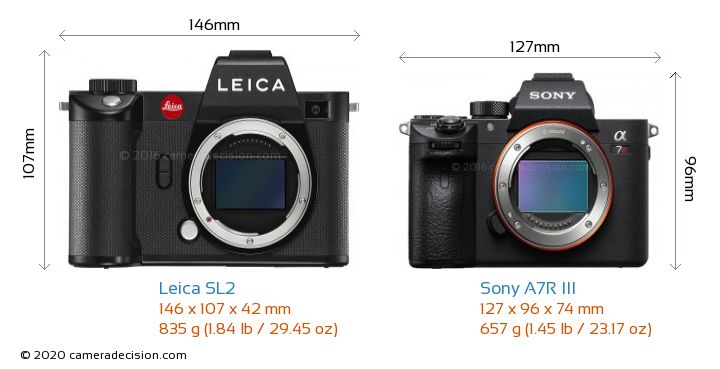 Here is the back view size comparison of Leica SL2 and Sony A7R III. 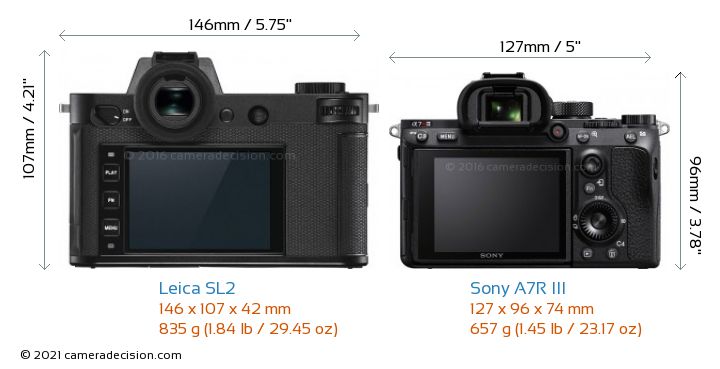 Weight is another important factor especially when deciding on a camera that you want to carry with you all day. Sony A7R III is significantly lighter (178g ) than the Leica SL2 which may become a big advantage especially on long walking trips.

Also keep in mind that body weight is not the only deciding factor when comparing two interchangeable camera bodies, you have to also take into account the lenses that you will be using with these bodies. Since both Leica SL2 and Sony A7R III have the same Full frame sized sensor, their lenses for a similar focal length and aperture will be similar in size and weight.

Both SL2 and A7R III have weather sealings in their body, making them resistant to water and dust.

Leica SL2's sensor provides 5MP more than Sony A7R III's sensor, which gives a significant advantage in real life. You can print your images larger or crop more freely. On the other hand, please keep in mind that Max sensor resolution is not the only determinant of resolving power. Factors such as the optical elements, low pass filter, pixel size and sensor technology also affects the final resolution of the captured image.

Another similarity between these two cameras is that both Sony A7R III and Leica SL2 sensors lack anti-alias (Low-Pass) filters. Removing anti-alias filter increases the sharpness and level of detail but at the same time, it increases the chance of moire occurring in certain scenes.

Below you can see the SL2 and A7R III sensor size comparison. 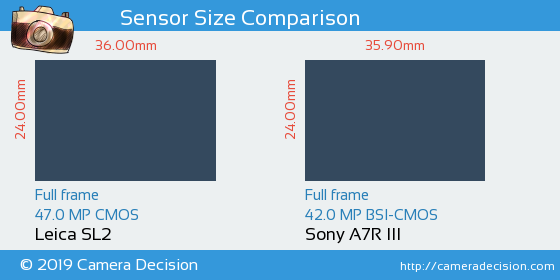 Leica SL2 and Sony A7R III have almost the same sensor size so none of them has any significant advantage over other in providing control over depth of field when used with same focal length and aperture.

In this section, we rank and compare Leica SL2 and Sony A7R III for five different photography types in order to make your decision process easier in case you are specifically interested in one or more of these areas.

Another important factor is the availability of image stabilization. Both Leica SL2 and Sony A7R III has Sensor based Image stabilization which means that all the lenses will be stabilized in these bodies.

You may have already made your decision about which camera suits better for your needs and your budget so far but in case you wonder how we rated Leica SL2 and Sony A7R III, below you can find their scores in five different aspects. Our Decision Algorithm dynamically scores cameras using 63 different specs, current price and DxO Mark scores (where possible) in order to make a more objective and consistent comparison.

Here is a summary of how Leica SL2 and Sony A7R III scores compare: