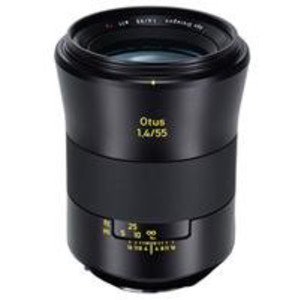 x
Add a Camera for comparison
Zeiss Otus 1.4/55 is a Fixed aperture Manual Focus (MF) Standard Prime lens with 35mm FF max sensor coverage, and it is designed to be used with Canon EF mount cameras.

Zeiss Otus 1.4/55 is a member of Zeiss's Otus series of lenses. Below you can see the latest lenses in this series.

Size and weight is a very important decision factor when searching for your next lens. Zeiss Otus 1.4/55 has a maximum diameter of 92mm and total length of 141mm.

Zeiss Otus 1.4/55 has a Max Magnification Ratio of 0.15x and has a minimum focusing distance of 0.5m. 0.15x means that the max magnification ratio is very low and not suitable even for modest close-up shots.

Zeiss Otus 1.4/55 comes with a removable lens hood which is handy to reduce lens flare and glare in your photos.

Here is the eight most popular comparisons of Zeiss Otus 1.4/55 amongst Camera Decision readers.