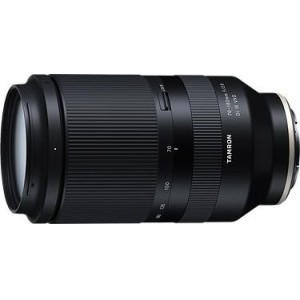 x
Add a Camera for comparison
Tamron 70-180mm F2.8 Di is an Auto Focus (AF) Telephoto Zoom lens with 35mm FF max sensor coverage and it is designed to be used with Sony E mount cameras.

Tamron 70-180mm F2.8 Di features Rotary (extending) zoom method where the length of the lens changes as you zoom in or out. This makes it possible to design the lens with a smaller minimum length ( generally when it is zoomed out) compared to internal zoom lenses. The disadvantages of this design are being harder to seal against dust and moisture, weight balance shifting while zooming and zoom creep in certain lenses.

Tamron 70-180mm F2.8 Di has a Zoom lock feature which eliminates Zoom creep where focal length of the lens changes with gravity when it's held downwards or upwards.

Tamron 70-180mm F2.8 Di comes with a removable lens hood which is handy to reduce lens flare and glare in your photos.

Here is the eight most popular comparisons of Tamron 70-180mm F2.8 Di amongst Camera Decision readers.