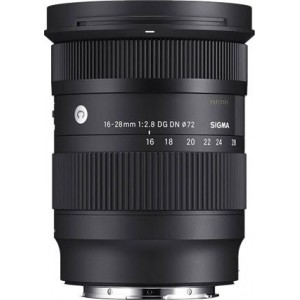 x
Add a Camera for comparison
Sigma 16-28mm F2.8 E is an Auto Focus (AF) Wideangle Zoom lens with 35mm FF max sensor coverage and it is designed to be used with Sony E mount cameras.

Sigma 16-28mm F2.8 E is a member of Sigma's Contemporary series of lenses. Below you can see the latest lenses in this series.

Sigma 16-28mm F2.8 E features Rotary (internal) zoom method where the length of the lens doesn't change while you are zooming in or out. Even though this design has a size disadvantage in general compare to extending designs, it has the benefits of better sealing against dust and moisture, no zoom creep and no weight balance shift while zooming.

Sigma 16-28mm F2.8 E has a Max Magnification Ratio of 0.18x and has a minimum focusing distance of 0.25m. 0.18x means that the max magnification ratio is very low and not suitable even for modest close-up shots.

Sigma 16-28mm F2.8 E comes with a removable petal shaped lens hood which is handy to reduce lens flare and glare in your photos. The model number of the hood is LH756-01.

Here is the eight most popular comparisons of Sigma 16-28mm F2.8 E amongst Camera Decision readers.