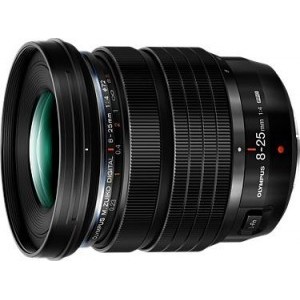 Olympus ED 8-25mm F4 Pro is a weather sealed lens which provides an extra protection to prevent water and dust get inside the lens and camera body under light rain, snow and wind. In order to have an effective protection, you have to pair the Olympus ED 8-25mm F4 Pro with a weather sealed camera body such as Panasonic GH6, OM System OM-1 and Panasonic GH5 II.

Olympus ED 8-25mm F4 Pro features Rotary (extending) zoom method where the length of the lens changes as you zoom in or out. This makes it possible to design the lens with a smaller minimum length ( generally when it is zoomed out) compared to internal zoom lenses. The disadvantages of this design are being harder to seal against dust and moisture, weight balance shifting while zooming and zoom creep in certain lenses.

Olympus ED 8-25mm F4 Pro has a Max Magnification Ratio of 0.14x and has a minimum focusing distance of 0.23m. 0.14x means that the max magnification ratio is very low and not suitable even for modest close-up shots.

Olympus ED 8-25mm F4 Pro is a fixed aperture lens with a constant max aperture of f4 from 8mm all the way to the 25mm .

Olympus ED 8-25mm F4 Pro comes with a removable lens hood which is handy to reduce lens flare and glare in your photos.