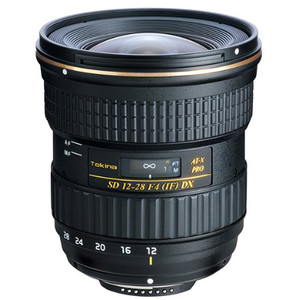 Size and weight is a very important decision factor when searching for your next lens. Tokina 12-28mm f4 Pro DX has a maximum diameter of 84mm and total length of 90mm.

Tokina 12-28mm f4 Pro DX features Rotary (internal) zoom method where the length of the lens doesn't change while you are zooming in or out. Even though this design has a size disadvantage in general compare to extending designs, it has the benefits of better sealing against dust and moisture, no zoom creep and no weight balance shift while zooming.

Tokina 12-28mm f4 Pro DX comes with a removable lens hood which is handy to reduce lens flare and glare in your photos. The model number of the hood is BH-77B.