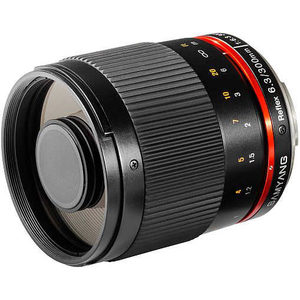 x
Add a Camera for comparison
Samyang 300mm f6.3 is a Manual Focus (MF) Super Telephoto Prime lens with FourThirds max sensor coverage and it is designed to be used with Micro Four Thirds mount cameras.

Samyang 300mm f6.3 has a fixed focal lenght of 300mm which has a 35mm equivalent focal range of 600mm when used on a FourThirds format camera.

Alternatively, you can check the Olympus 300mm F4 IS Pro in Micro Four Thirds mount that have similar focal range but features Optical Image Stabilization.

Samyang 300mm f6.3 comes with a removable lens hood which is handy to reduce lens flare and glare in your photos.

Here is the eight most popular comparisons of Samyang 300mm f6.3 amongst Camera Decision readers.