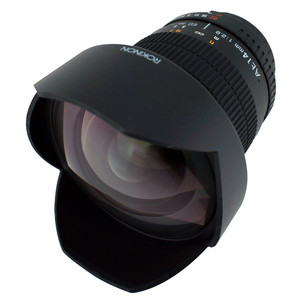 x
Add a Camera for comparison
Rokinon 14mm f2.8 is a Fixed aperture Manual Focus (MF) Ultra-Wideangle Prime lens with 35mm FF max sensor coverage, and it is designed to be used with Sony Alpha mount cameras. Rokinon 14mm f2.8 is also sold under the Samyang 14mm f2.8 IF ED MC name in some countries.

Size and weight is a very important decision factor when searching for your next lens. Rokinon 14mm f2.8 has a maximum diameter of 87mm and total length of 96mm.

Rokinon 14mm f2.8 comes with a built-in petal shaped lens hood which is handy to reduce lens flare and glare in your photos.

Here is the eight most popular comparisons of Rokinon 14mm f2.8 amongst Camera Decision readers.