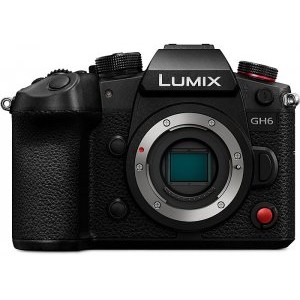 Panasonic GH6 is the latest member of Panasonic's GH series of cameras. Below you can see the latest models in this series and how their main specs have changed with each new version.

Check the link below to compare specs of the latest cameras in this series side by side:
Panasonic GH6 vs GH5 II vs GH5S vs GH5 vs GH4

Now let's get in to more details of our Panasonic GH6 review by analysing its specs and features and listing out its pros and cons compared to average competitor cameras in its class.

Here is the front and top view image of Panasonic GH6 with the dimensions:


In order to give you a better idea about the real life size of Panasonic GH6, we have added an image of how it looks next to a credit card and an AA type battery.

Below you can find the comparison of the weight and thickness of Panasonic GH6 with its main competitors:

Panasonic GH6 has environmental sealings on its body which makes it a weather resistant camera, providing resistance against the water and dust getting in to the camera. If you like outdoors photography and want to be able to use your camera in extreme conditions, Panasonic GH6 will serve you well. If you attach one of these Panasonic GH6 weather Sealed lenses to your camera, you will have a great all weather kit.

Panasonic GH6 has a Micro Four Thirds lens mount and currently there are 119 native lenses available for this mount. MFT is the most mature and diverse mount in the Mirrorles camera world. Panasonic offers a big selection of MFT lenses with high optical quality. Other main contributor of the system, Olympus also offers similarly well regarded lenses. Third party lens manufacturers keeps on offering more lenses for the system every day as well.

Panasonic Lumix DC-GH6 also features Gyro Stabilization system where the built-in gyro records the data from the sensors inside the camera only to use it during post processing - using a software such as Catalyst Browse - to stabilize the recorded video, although with an extra crop. Using this software based stabilization method that only very few cameras have, can create impressive results even without the use of a gimbal or stabilizer. In order to have the most pleasing results, remember to set your video settings to a high shutter rate though.

There are 39 lenses with weather sealing for Panasonic GH6 that you can couple with its weather sealed body.

Here are some of the most popular Panasonic GH6 Lenses on Camera Decision:

Another important feature about Panasonic GH6's sensor is the lack of anti-alias (Low-pass) filter. Removing anti-aliasing filter increases the sharpness and level of detail but on the other side it also increases the chance of moire occurring in certain scenes.

Let's look at how the size of the Panasonic GH6's Four Thirds sensor compares with other standard sensor sizes.

Panasonic GH6 has a Fully Articulated 3.00-inch LCD screen with a resolution of 1,840k dots. Articulated screens are more video oriented compared to only tilting or fixed screens. On the other hand, photography oriented users generally prefer tilting screens. Both the screen size and the screen resolution is up to the standards of this class. 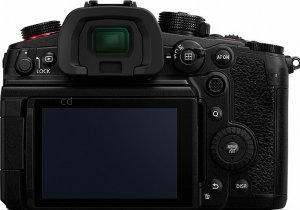 For those of you who loves shooting selfies, self or group photos, Panasonic GH6 will make your life easier with its Selfie friendly screen. Another group of users who will take advantage of GH6's LCD screen are Vloggers and any video creators who are working in a single-person setup. 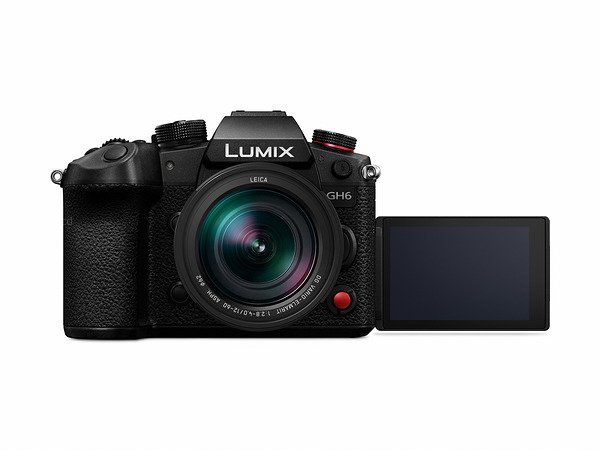 GH6 has a built-in Electronic viewfinder, making it easier to shoot in direct sunlight and in other situations where it might be difficult to view the LCD monitor. The viewfinder has a resolution of 3,680kdots and coverage of 100%. The Viewfinder Eye Point distance is 21mm . 100% coverage ensures that what you see in the viewfinder while shooting matches exactly what you will get later in your image, helping accurate framing your shots and minimizes the need for cropping images later. The magnification ratio of the viewfinder is 0.76x (35mm equivalent).

Panasonic GH6 features built-in wireless (Wi-Fi) connectivity ( 2.4GHz (802.11b/g/n), 5GHz (802.11a/n/ac)) which lets you transfer your photos directly to compatible devices without any physical connection. Panasonic GH6's Bluetooth connectivity feature comes handy for connecting other devices that supports it. One other feature that we like is the ability to use our smartphone as a remote to control our GH6. You can change camera settings, release shutter, view LCD screen and tranfer files using remote control app.

Panasonic GH6 also features USB charging capability which let's you charge your camera via a usb cable without removing the battery. 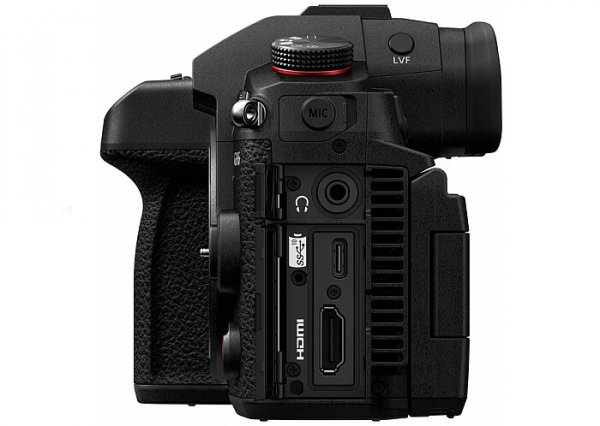 Panasonic GH6 is powered by DMW-BLK22 battery which provides a battery life of 360 shots according to CIPA standards. Considering that the average battery life of Mirrorless type cameras is 376 shots, its battery life is about average in its class but it would still be wise to invest in some spare batteries for long photo trips.

With Panasonic GH6, you can record your videos at a highest resolution of 5760 x 2880 at 120p,60p,50p,30p,25p,24p fps with bit rates up to 800 mbps and save in MPEG-4, H.264 and H.265 formats. This means that Panasonic GH6 provides an impressive 6K video, only second to 8K cameras in high resolution. Although it is not a very widely used format, it gives the user enough extra room over 4K to do cropping or high quality sampling in post-process.

A great advantage of Panasonic GH6 while shooting video at max resolution of 5.7K is that there is no crop factor so you can use your lens with its actual focal length.

GH6 features a high speed mode where it captures videos at 300fps which helps to create slow motion videos. If you shoot a video at a frame rate of 300fps and play it back at 24fps, the video will be 12.5x slower and longer than normal.

Utilizing its 4K Video recording abilities in a creative way, Panasonic GH6 sports a 4K Photo Mode where you can capture 8 MP photos from 4K videos. Using a software such as Adobe Lightroom on your PC or in-camera function, you can review the 4K video frame by frame and extract the image that you like the most.

Unfortunately GH6 doesn't have a built-in flash but it has a flash shoe for mounting external flashes.

Panasonic GH6 features a Contrast Detection autofocusing system. Panasonic GH6 also features Face detection AF where it intelligently detects the faces in the frame and locks the focus automatically. In addition to the face detect AF, GH6 has a more sophisticated feature called Eye Tracking AF which detects and locks focus to the selected eye of the person in the frame accurately and tracks as the subject moves. Eye tracking AF of Panasonic GH6 is a perfect feature for shooting portraits and is especially useful when fast lenses are used and the depth of field is very narrow.

Panasonic GH6 has a special Post Focus mode which uses its 4K video and focus bracketing features together to shoot and stack a burst of images into a single image which you can change the focus point on the LCD screen after it is taken.

In this section, we review and score Panasonic GH6 in 5 different photography areas.

Panasonic GH6 has a score of 90 for Street Photography which makes it an EXCELLENT candidate for this type of photography.
Electronic Built-in Viewfinder
Live-view
Face-Detection Focusing
Fully Articulated LCD Screen

In this section, we analyse how Panasonic GH6 compares with other Mirrorless cameras within a similar price range.
Read a more detailed analysis of Panasonic GH6 alternatives.

Here is the eight most popular comparisons of Panasonic GH6 amongst Camera Decision readers.

It would also be interesting to compare Panasonic GH6 with DSLR Cameras. Below we have listed 4 highest ranked DSLR cameras in Panasonic GH6's price range.

Currently, Panasonic GH6 has an Overall Score of 83/100 which is based on our evaluation of 69 different technical parameters. Our scores are dynamically updated whenever a new camera is added to our database or when we change our ranking algorithm and the maximum score is always 100. Panasonic Lumix DC-GH6 is ranked #35 out of 229 in Mirrorless cameras (Top 20 Mirrorless), and ranked #39 out of 1242 in all Cameras (Top 20 Overall).