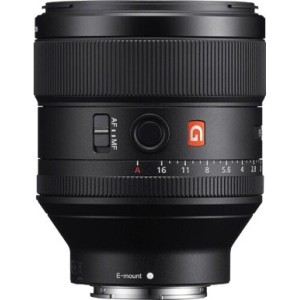 Sony FE 85mm F1.4 GM is a member of Sony's GM series of lenses. GM stands for G Master and represents the top of the line lenses on the Sony E mount line-up. Below you can see the latest lenses in this series.

Sony FE 85mm F1.4 GM has a Zoom lock feature which eliminates Zoom creep where focal length of the lens changes with gravity when it's held downwards or upwards.

Sony FE 85mm F1.4 GM has a Max Magnification Ratio of 0.12x and has a minimum focusing distance of 0.8m. 0.12x means that the max magnification ratio is very low and not suitable even for modest close-up shots.

Sony FE 85mm F1.4 GM comes with a removable lens hood which is handy to reduce lens flare and glare in your photos. The model number of the hood is ALC-SH142.