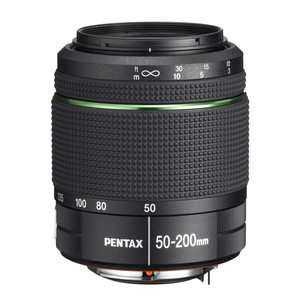 x
Add a Camera for comparison
Pentax 50-200mm F4-5.6 ED is an Auto Focus (AF) Telephoto Zoom lens with APS-C / DX max sensor coverage and it is designed to be used with Pentax KAF mount cameras.

Pentax 50-200mm F4-5.6 ED features Rotary (extending) zoom method where the length of the lens changes as you zoom in or out. This makes it possible to design the lens with a smaller minimum length ( generally when it is zoomed out) compared to internal zoom lenses. The disadvantages of this design are being harder to seal against dust and moisture, weight balance shifting while zooming and zoom creep in certain lenses.

Pentax 50-200mm F4-5.6 ED's optical formula consists of 11 elements in 10 groups.
**This post contains affiliate links and I will be compensated if you make a purchase after clicking through my links. As an Amazon Associate I earn from qualifying purchases.