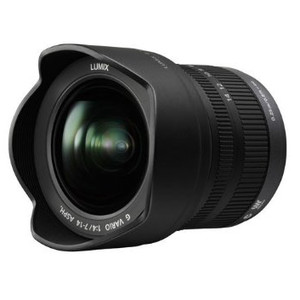 x
Add a Camera for comparison
Panasonic 7-14mm F4 ASPH is an Auto Focus (AF) Wideangle Zoom lens with FourThirds max sensor coverage and it is designed to be used with Micro Four Thirds mount cameras.

Panasonic 7-14mm F4 ASPH features Rotary (internal) zoom method where the length of the lens doesn't change while you are zooming in or out. Even though this design has a size disadvantage in general compare to extending designs, it has the benefits of better sealing against dust and moisture, no zoom creep and no weight balance shift while zooming.

Panasonic 7-14mm F4 ASPH has a Max Magnification Ratio of 0.08x and has a minimum focusing distance of 0.25m.

Panasonic 7-14mm F4 ASPH is a fixed aperture lens with a constant max aperture of f4 from 7mm all the way to the 14mm .