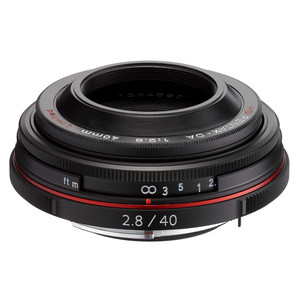 What type of photography is the Pentax 40mm F2.8 L lens good for?

The type of photography that you are planning to use the Pentax 40mm F2.8 L is an important decision factor. Here we have evaluated its suitability to various photography scenarios:

Here, we've included a summary of the advantages and disadvantages of the HD Pentax DA 40mm F2.8 Limited lens in a list form to help you determine whether it offers the features you need.

Size and weight is a very important decision factor when searching for your next lens. Pentax 40mm F2.8 L has a maximum diameter of 63mm and total length of 15mm. It weighs 80g / 2.8 oz.

Pentax 40mm F2.8 L has a fixed focal lenght of 40mm which has a 35mm equivalent focal range of 60mm when used on a APS-C / DX format camera.

Pentax 40mm F2.8 L has a Max Magnification Ratio of 0.13x and has a minimum focusing distance of 0.4m. 0.13x means that the max magnification ratio is very low and not suitable even for modest close-up shots.

Pentax 40mm F2.8 L comes with a removable lens hood which is handy to reduce lens flare and glare in your photos. The model number of the hood is MH-RE49.

Here is the eight most popular comparisons of Pentax 40mm F2.8 L amongst Camera Decision readers.