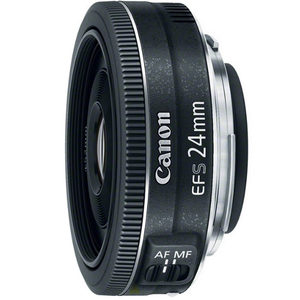 What type of photography is the Canon 24mm F2.8 STM lens good for?

The type of photography that you are planning to use the Canon 24mm F2.8 STM is an important decision factor. Here we have evaluated its suitability to various photography scenarios:

Canon 24mm F2.8 STM is a member of Canon's EF STM Prime series of lenses. Below you can see the latest lenses in this series.

Here, we've included a summary of the advantages and disadvantages of the Canon EF-S 24mm F2.8 STM lens in a list form to help you determine whether it offers the features you need.

Size and weight is a very important decision factor when searching for your next lens. Canon 24mm F2.8 STM has a maximum diameter of 68mm and total length of 23mm. It weighs 125g / 4.4 oz.

Alternatively, you can check the Canon 24mm f2.8 IS USM in Canon EF-S mount that have similar focal range but features Optical Image Stabilization.

Canon 24mm F2.8 STM has a Max Magnification Ratio of 0.27x and has a minimum focusing distance of 0.16m. For a non-macro lens, the 0.27x is considered a high magnification and will come handy for close-up shots.

Canon 24mm F2.8 STM doesn't come with a lens hood but there is an optional lens hood with a part code of ES-52 that you can order separately.

Here is the eight most popular comparisons of Canon 24mm F2.8 STM amongst Camera Decision readers.