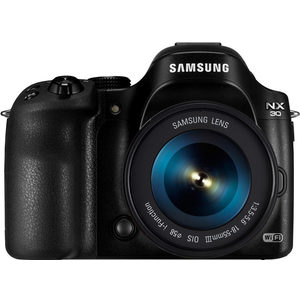 Here we are comparing two Mirrorless cameras from Samsung and Olympus. Samsung NX30 was introduced to market in January 2014 and Olympus E-M1 II was launched in September 2016. As you can see, NX30 is 2 years older than E-M1 II. Let's see if this age difference between two cameras makes a big difference.

Both cameras have 20.0MP sensors but Samsung NX30's sensor is APS-C sized whereas Olympus E-M1 II has a Four Thirds sensor.

Let's have a brief look at the main features of Samsung NX30 and Olympus E-M1 II before getting into our more detailed comparison.

Let's read on the following sections in order to better understand in detail how Samsung NX30 and Olympus E-M1 II compares and hopefully end up with enough arguments to decide which one is better for you.

Size and weight is a big decision factor when you are trying to find the ideal camera for your needs. In this section, We are going to illustrate Samsung NX30 and Olympus E-M1 II side-by-side from the front, back and top in their relative dimensions. 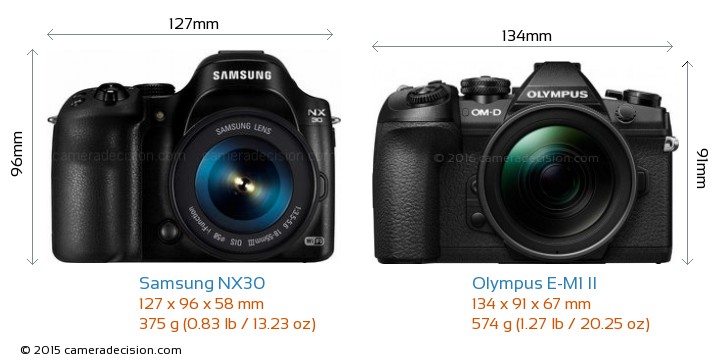 Weight is another important factor especially when deciding on a camera that you want to carry with you all day. Samsung NX30 is significantly lighter (199g ) than the Olympus E-M1 II which may become a big advantage especially on long walking trips.

Also keep in mind that body weight is not the only deciding factor when comparing two interchangeable camera bodies, you have to also take into account the lenses that you will be using with these bodies. Since Samsung NX30 has an APS-C sized sensor and Olympus E-M1 II has a smaller Four Thirds sensor, Olympus E-M1 II's lenses for a similar focal length and aperture will generally be lighter and smaller than the Samsung NX30 lenses.

Thanks to the weather sealed body of E-M1 II, you can use this camera with more confidence under conditions where there is risk of exposure to water and dust compared to NX30.

Since Samsung NX30's has a larger sensor area with the same resolution, this means that it also has a larger pixel area hence better light collecting capacity for a given aperture compared to Olympus E-M1 II.

Below you can see the NX30 and E-M1 II sensor size comparison.

As seen above, Samsung NX30 has a 1.6x Larger sensor area than Olympus E-M1 II. Larger sensors give photographer more control on the depth of field and blurry background compared to smaller sensor when shot in same focal length and aperture.


DxOMark is a benchmark that scientifically assesses image quality of camera sensors. It scores camera sensors for color depth (DXO Portrait), dynamic range (DXO Landscape) and low-light sensitivity (DXO Sports), and also gives them an overall score. Samsung NX30 and Olympus E-M1 II sensors have been tested by DxO and the results show that E-M1 II has a better overall score of 80, 3 points higher compared to NX30's score of 77.

In this section, we rank and compare Samsung NX30 and Olympus E-M1 II for five different photography types in order to make your decision process easier in case you are specifically interested in one or more of these areas.

You may have already made your decision about which camera suits better for your needs and your budget so far but in case you wonder how we rated Samsung NX30 and Olympus E-M1 II, below you can find their scores in five different aspects. Our Decision Algorithm dynamically scores cameras using 63 different specs, current price and DxO Mark scores (where possible) in order to make a more objective and consistent comparison.

Here is a summary of how Samsung NX30 and Olympus E-M1 II scores compare:

Olympus E-M1 II has a higher Overall Score than the Samsung NX30 and would be our choice if we have to decide between these two cameras.